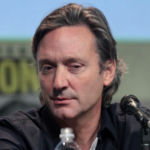 Why Is Burr Steers Influential?

According to Wikipedia, Burr Gore Steers is an American actor, screenwriter, and director. His films include Igby Goes Down and 17 Again . He is a nephew of writer Gore Vidal. Family Steers was born in Washington, D.C. His father, Newton Ivan Steers, Jr. , was a businessman and politician who briefly served as a Republican congressman from Maryland. Through his mother, Nina Gore Auchincloss , he is a grandson of stockbroker and lawyer Hugh D. Auchincloss, a cousin of Louis Auchincloss. Nina is also the stepsister of Jacqueline Kennedy Onassis and younger half-sister of the writer Gore Vidal. Steers is a relative of vice president Aaron Burr, the third Vice President of the United States. Steers's great-grandfather Thomas Gore served as Oklahoma's first Democratic senator, from 1907 until 1921 and from 1931 until 1937, while his great-great-grandfather Oliver Burr Jennings was a founder of Standard Oil. Steers's godfather was former Virginia Senator John Warner.

Other Resources About Burr Steers

What Schools Are Affiliated With Burr Steers?

Burr Steers is affiliated with the following schools: