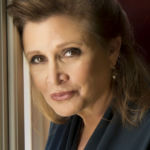 Why Is Carrie Fisher Influential?

According to Wikipedia, Carrie Frances Fisher was an American actress and writer. She played Princess Leia in the Star Wars films , a role for which she received four Saturn Award nominations. She reprised the role in Star Wars: The Force Awakens , Star Wars: The Last Jedi —a posthumous release that was dedicated to her—and appeared in Star Wars: The Rise of Skywalker through the use of unreleased footage from Star Wars: The Force Awakens. Fisher's other film credits include Shampoo , The Blues Brothers , Hannah and Her Sisters , The 'Burbs , When Harry Met Sally... , Soapdish , and The Women . She was nominated twice for the Primetime Emmy Award for Outstanding Guest Actress in a Comedy Series for her performances on the television series 30 Rock and Catastrophe .

Other Resources About Carrie Fisher

What Schools Are Affiliated With Carrie Fisher?

Carrie Fisher is affiliated with the following schools:

What Are Carrie Fisher's Academic Contributions?

Carrie Fisher has made the following academic contributions: