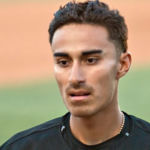 Why Is Cesar Carrillo Influential?

According to Wikipedia, Cesar Carrillo is an American professional baseball pitcher who played in Major League Baseball with the San Diego Padres in 2009. Carrillo was a 2005 first round draft pick by the Padres, selected #18 overall. He was inducted to the University of Miami Baseball Hall of Fame in 2019, where he went 24–0 to start his career. Carrillo was released by the Detroit Tigers in 2013, after he was implicated in the Bio-Genesis scandal, he served a 100- game suspension under the Tigers minor league system. He was with the Arizona Diamondbacks in 2014.

Other Resources About Cesar Carrillo

What Schools Are Affiliated With Cesar Carrillo?

Cesar Carrillo is affiliated with the following schools: