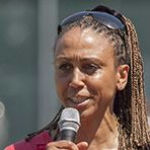 Why Is Charmaine Crooks Influential?

According to Wikipedia, Charmaine Crooks , is a Canadian athlete, five-time Olympian and Olympic Silver Medallist . Crooks was born in Mandeville, Jamaica, but represented Canada for close to 20 years in athletics. The first Canadian woman to run 800 metres in under two minutes, she won gold medals at the Pan American, Commonwealth, World Cup, and the World Student Games. In 1996, she had the honour of being Canada's Flag Bearer at the Opening Ceremonies of the Atlanta Centennial Olympic Games. She is the fifth child with five sisters and three brothers.

Other Resources About Charmaine Crooks

What Schools Are Affiliated With Charmaine Crooks?

Charmaine Crooks is affiliated with the following schools: