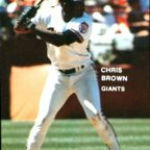 Why Is Chris Brown Influential?

According to Wikipedia, John Christopher Brown was an American third baseman in Major League Baseball during the 1980s, most notably with the San Francisco Giants. Biography Early life Born in Jackson, Mississippi, Brown was a graduate of Crenshaw High School in Los Angeles, California, where he played high school baseball with Darryl Strawberry. The 1979 Crenshaw High Cougars baseball team was the subject of Michael Sokolove's The Ticket Out: Darryl Strawberry and the Boys of Crenshaw.

Other Resources About Chris Brown