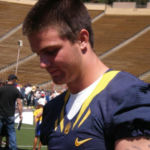 Why Is Chris Conte Influential?

According to Wikipedia, Christopher Michael Conte is a former American football safety. He was drafted by the Chicago Bears in the third round of the 2011 NFL Draft. He played college football at California. Early life Conte attended Loyola High School, and graduated in 2007. During his time at Loyola, Conte played both safety and wide receiver. Conte was named to the All-Far West team by SuperPrep, and posted 58 tackles with 4 INTs and caught 43 passes for 614 yards and 4 touchdowns in his senior year, as well as helping his team to the CIF Division I title as a junior, collecting 38 tackles and 2 INTs.

Other Resources About Chris Conte