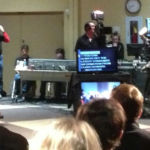 Why Is Clark Howard Influential?

According to Wikipedia, Clark Brian Howard is a popular consumer expert and former host of the nationally syndicated Clark Howard Show. Life and career Howard, who grew up in Atlanta, Georgia, the son of Bernard and Joy Garson Howard . His parents were prominent members of Atlanta's Jewish community. He had been a nationally syndicated radio host since 1989, teaching consumers ways to "save more, spend less and avoid rip-offs." The Clark Howard Show was heard every day on more than 200 radio stations throughout North America, and aired from News/Talk WSB, WSB AM/WSBB FM in Atlanta. He is a frequent consumer expert guest on other talk, variety and news programs. Howard's first career was in the travel agency business. Howard attended the Westminster Schools in Atlanta before graduating from the American University in 1976 with a BA in Urban Government. He went on to receive his Master of Business Administration degree from Central Michigan University in 1977. In 1987, he retired from the travel agency business he founded in 1981 and began giving travel advice in guest appearances on Atlanta radio. His segments were so popular that he was soon given his own radio show. In 1991, Howard also became a consumer affairs TV reporter for WSB-TV, the local ABC affiliate. In 1993, he founded the Consumer Action Center to have volunteers answer consumer questions off the air. Howard's website followed in 1997, and in 1998 his show went into syndication.

Other Resources About Clark Howard

What Schools Are Affiliated With Clark Howard?

Clark Howard is affiliated with the following schools: