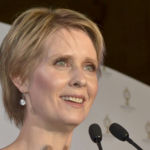 Why Is Cynthia Nixon Influential?

According to Wikipedia, Cynthia Ellen Nixon is an American actress, activist and theatre director. For her portrayal of Miranda Hobbes in the HBO series Sex and the City , she won the 2004 Primetime Emmy Award for Outstanding Supporting Actress in a Comedy Series. She reprised the role in the films Sex and the City and Sex and the City 2 , as well as the television show And Just Like That... . Her other film credits include Amadeus , James White , and playing Emily Dickinson in A Quiet Passion .

Other Resources About Cynthia Nixon

What Schools Are Affiliated With Cynthia Nixon?

Cynthia Nixon is affiliated with the following schools: