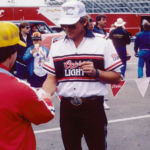 Why Is Dan Pastorini Influential?

According to Wikipedia, Dante Anthony Pastorini is a former American football quarterback who played in the National Football League for 13 seasons, primarily with the Houston Oilers. He played college football at Santa Clara and was selected third overall by the Oilers in the 1971 NFL Draft. A Pro Bowl selection during his Oilers tenure, he was also part of the Oakland Raiders team that won a Super Bowl title in Super Bowl XV alongside fellow 1971 pick Jim Plunkett. Pastorini spent his final three seasons in sparse appearances for the Los Angeles Rams and Philadelphia Eagles. After retiring from the NFL, Pastorini pursued a career as Top Fuel dragster driver in the National Hot Rod Association .

Other Resources About Dan Pastorini