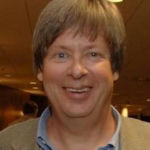 Why Is Dave Barry Influential?

According to Wikipedia, David McAlister Barry is an American author and columnist who wrote a nationally syndicated humor column for the Miami Herald from 1983 to 2005. He has also written numerous books of humor and parody, as well as comic novels and children's novelss. Barry's honors include the Pulitzer Prize for Commentary and the Walter Cronkite Award for Excellence in Journalism .

Other Resources About Dave Barry

What Schools Are Affiliated With Dave Barry?

Dave Barry is affiliated with the following schools:

What Are Dave Barry's Academic Contributions?

Dave Barry has made the following academic contributions: