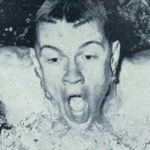 Why Is Dave Gillanders Influential?

According to Wikipedia, John David Gillanders is an American competition swimmer, Olympic medalist, and former world record-holder. He still competes in masters swimming in the 75–79 age group. Early life Originally from Schenectady, New York, Gillanders graduated from Dondero High School in Royal Oak, Michigan in 1957. While there, he earned state and national honors swimming the individual butterfly and as a member of the medley relay team. He was inducted into the Royal Oak High School Hall of Fame in 1996.

Other Resources About Dave Gillanders

What Schools Are Affiliated With Dave Gillanders?

Dave Gillanders is affiliated with the following schools: