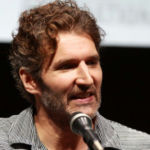 Why Is David Benioff Influential?

According to Wikipedia, David Friedman , known professionally as David Benioff , is an American writer, director and producer. Along with his fellow collaborator D. B. Weiss, he is best known as co-creator, showrunner, and writer of Game of Thrones , the HBO adaptation of George R. R. Martin's series of books A Song of Ice and Fire. He is also known for writing 25th Hour , Troy , City of Thieves and co-writing X-Men Origins: Wolverine .

Other Resources About David Benioff

What Schools Are Affiliated With David Benioff?

David Benioff is affiliated with the following schools:

What Are David Benioff's Academic Contributions?

David Benioff has made the following academic contributions: