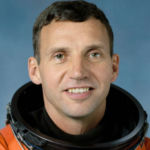 Why Is David C. Hilmers Influential?

According to Wikipedia, David Carl Hilmers, M.D. is a former NASA astronaut who flew four Space Shuttle missions. He was born in Clinton, Iowa, but considers DeWitt, Iowa, to be his hometown. He has two grown sons. His recreational interests include playing the piano, gardening, electronics, spending time with his family, and all types of sports. His parents are deceased. With five academic degrees, he is the second most formally educated U.S. astronaut, behind Story Musgrave with six.

Other Resources About David C. Hilmers

What Schools Are Affiliated With David C. Hilmers?

David C. Hilmers is affiliated with the following schools: