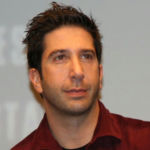 Why Is David Schwimmer Influential?

According to Wikipedia, David Lawrence Schwimmer is an American actor, comedian, director and producer. He gained worldwide recognition for portraying Ross Geller in the sitcom Friends, for which he received a Screen Actors Guild Award and a Primetime Emmy Award nomination for Outstanding Supporting Actor in a Comedy Series in 1995. While still acting in Friends, his first leading film role was in The Pallbearer , followed by roles in Kissing a Fool, Six Days, Seven Nights, Apt Pupil , and Picking Up the Pieces . He was then cast in the miniseries Band of Brothers as Herbert Sobel.

Other Resources About David Schwimmer

What Schools Are Affiliated With David Schwimmer?

David Schwimmer is affiliated with the following schools: