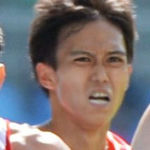 Why Is David Torrence Influential?

According to Wikipedia, David Torrence was a Peruvian-American middle-distance runner and indoor American record holder in the 1000 meters . Born in Okinawa, Japan, Torrence was raised in Tarzana, California. After graduating from Loyola High School in 2003, he went on to run for the University of California, Berkeley and Hoka One One. Torrence represented Peru at the 2016 Summer Olympics.

Other Resources About David Torrence

What Schools Are Affiliated With David Torrence ?

David Torrence is affiliated with the following schools: