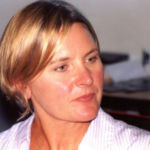 Why Is Denise Crosby Influential?

According to Wikipedia, Denise Michelle Crosby is an American actress and model known for portraying Security Chief Tasha Yar mainly in season one of Star Trek: The Next Generation, and Yar's daughter, the half-Romulan Commander Sela, in subsequent seasons. She is also known for her numerous film and television roles, and for starring in and producing the film Trekkies.

Other Resources About Denise Crosby

What Schools Are Affiliated With Denise Crosby?

Denise Crosby is affiliated with the following schools: