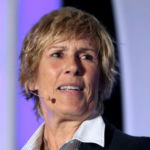 Why Is Diana Nyad Influential?

According to Wikipedia, Diana Nyad is an American author, journalist, motivational speaker, and long-distance swimmer. Nyad gained national attention in 1975 when she swam around Manhattan and in 1979 when she swam from North Bimini, The Bahamas, to Juno Beach, Florida . In 2013, on her fifth attempt and at age 64, she became the first person claiming to have swum from Cuba to Florida without the aid of a shark cage, swimming from Havana to Key West although this has not been formally ratified by any recognised swim body. Nyad was also once ranked thirteenth among US women squash players.

Other Resources About Diana Nyad

What Schools Are Affiliated With Diana Nyad?

Diana Nyad is affiliated with the following schools: