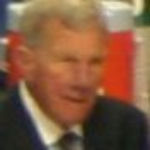 Why Is Dick Harter Influential?

According to Wikipedia, Richard Alvin Harter was an American basketball coach who served as both a head and assistant coach in both the NBA and NCAA. Early life Born in Pottstown, Pennsylvania, Harter attended the University of Pennsylvania in Philadelphia, where he played basketball for the Quakers and graduated in 1953. He served two years as an officer in the U.S. Marine Corps, and then was an assistant freshman coach back at Penn for a year. He then coached at Germantown Academy for three years, then back to Penn in 1959 as an assistant coach.

Other Resources About Dick Harter

What Schools Are Affiliated With Dick Harter?

Dick Harter is affiliated with the following schools: