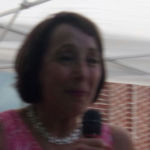 Why Is Didi Conn Influential?

According to Wikipedia, Edith "Didi" Conn is an American actress. She is best known for her work as Frenchy in Grease, Denise Stevens Downey in Benson and Stacy Jones in Shining Time Station. Early life Edith Bernstein was born on July 13, 1951, in Brooklyn, New York. She had a Conservative "holiday Jewish" upbringing, and is the daughter of a clinical psychologist; "Didi" was her childhood nickname. She attended Midwood High School. Her brother is opera singer Richard Bernstein.

Other Resources About Didi Conn