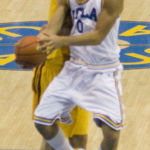 Why Is Drew Gordon Influential?

According to Wikipedia, Drew Edward Gordon is an American professional basketball player for Budivelnyk of the Ukrainian Basketball Super League. The power forward began his college basketball career with the UCLA Bruins, then transferred during his sophomore year to the New Mexico Lobos. Gordon garnered a number of accolades for his play as the starting center for the Lobos, giving New Mexico a dominating inside presence. He is the older brother of Denver Nuggets forward Aaron Gordon.

Other Resources About Drew Gordon

What Schools Are Affiliated With Drew Gordon?

Drew Gordon is affiliated with the following schools: