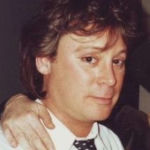 Why Is Eric Carmen Influential?

According to Wikipedia, Eric Howard Carmen is an American singer, songwriter, guitarist, and keyboardist. He was first known as the lead vocalist of the Raspberries. He had numerous hit songs in the 1970s and 1980s, first as a member of the Raspberries , and then with his solo career, including hits such as "All by Myself", "Never Gonna Fall in Love Again", "She Did It", "Hungry Eyes", and "Make Me Lose Control".

Other Resources About Eric Carmen

What Schools Are Affiliated With Eric Carmen?

Eric Carmen is affiliated with the following schools: