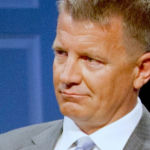 Why Is Erik Prince Influential?

According to Wikipedia, Erik Dean Prince is an American businessman, former U.S. Navy SEAL officer, and the founder of the private military company Blackwater USA. He served as Blackwater's CEO until 2009 and as its chairman until its sale to a group of investors in 2010. Prince heads the private equity firm Frontier Resource Group, and served as chairman of the Hong Kong-listed Frontier Services Group until 2021. Prince is the son of engineer and businessman Edgar Prince, and the brother of former U.S. Secretary of Education Betsy DeVos.

Other Resources About Erik Prince

What Schools Are Affiliated With Erik Prince?

Erik Prince is affiliated with the following schools: