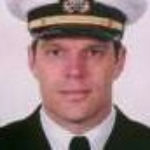 Why Is Erik S. Kristensen Influential?

According to Wikipedia, Erik Samsel Kristensen was a Lieutenant commander of the United States Navy SEALs who was killed in action during Operation Red Wings. He and several other SEALs set off as part of a search and rescue mission, hoping to assist a four-man SEAL team that was engaged in a firefight with Taliban fighters.

Other Resources About Erik S. Kristensen

What Schools Are Affiliated With Erik S. Kristensen?

Erik S. Kristensen is affiliated with the following schools: