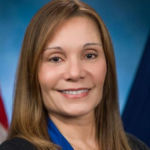 Why Is Evelyn Miralles Influential?

Evelyn Miralles was born in Caracas, Venezuela. She is one of the world’s leading experts in Virtual Reality technology.

Miralles earned an associate’s degree from Andrés Bello Catholic University in Caracas, before leaving to study in the United States, where she received her bachelor’s degree in computer graphics from Lamar University in Beaumont, Texas, and her master’s degree in computer science from the University of Houston-Clear Lake. After graduation, Miralles worked for CACI (Consolidated Analysis Center Inc.) International, eventually rising to the position of Chief Principal Engineer.

Beginning in 1992, CACI International tasked Miralles with providing support to NASA’s Space Shuttle program, as well as its contribution to the International Space Station. She was based at the Johnson Space Center’s Virtual Reality Laboratory in Houston.

Holding the title of Virtual Reality Principal Engineer and Technology Strategist, Miralles supervised the training of astronauts for living and working in microgravity and engaging in extra-vehicular activity (EVA), popularly known as “space walks.” In addition, Miralles worked on building a 3-D model of a habitat for a future station on the moon, which may be repurposed for a future Mars mission. She is also co-author of the virtual-reality flight software package known as EDGE. (EDGE stands for Engineering DOUG Graphics Exploration, while DOUG stands for Dynamic Onboard Ubiquitous Graphics.) NASA has used EDGE to train its astronauts since 2000.

Another highlight of Miralles’s career includes her membership on the team that mounted the Space Shuttle mission to repair the Hubble Space Telescope in 1993. Altogether, she worked with NASA for some 26 years.

Miralles is currently Associate Vice President for Strategic Information Initiatives and Technology at the University of Houston-Clear Lake.

According to Wikipedia, Evelyn Rodriguez Miralles is a Venezuelan-American engineer that served as the Chief Principal Engineer with CACI International at NASA Johnson Space Center Houston Texas. Her work at the Virtual Reality Laboratory at NASA furthered human spaceflight by training United States Astronauts to perform spacewalks and working outside a spacecraft in micro-gravity. Miralles is currently the Associate vice president for Strategic Information Initiatives and Technology at the University of Houston Clear Lake.

Other Resources About Evelyn Miralles

What Schools Are Affiliated With Evelyn Miralles?

Evelyn Miralles is affiliated with the following schools: