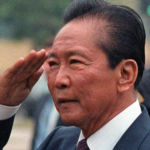 Why Is Ferdinand Marcos Influential?

According to Wikipedia, Ferdinand Emmanuel Edralin Marcos Sr., was a Filipino politician and lawyer who was the 10th president of the Philippines from 1965 to 1986, widely considered by academics, economists, and journalists as a kleptocrat. He ruled as a dictator under martial law from 1972 until 1981 and kept most of his martial law powers until he was deposed in 1986, branding his rule as "constitutional authoritarianism" under his New Society Movement. One of the most controversial leaders of the 20th century, Marcos' rule was infamous for its corruption, extravagance, and brutality.

Other Resources About Ferdinand Marcos

What Schools Are Affiliated With Ferdinand Marcos?

Ferdinand Marcos is affiliated with the following schools: