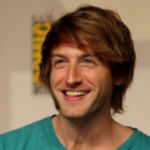 Why Is Fran Kranz Influential?

According to Wikipedia, Francis Elliott Kranz is an American actor and film director. He is known for his portrayal of Topher Brink in the science fiction drama series Dollhouse. He had prominent roles in the films The Cabin in the Woods and Much Ado About Nothing. In 2012, he played Bernard in Death of a Salesman beginning a career on Broadway that continued with 2014's You Can't Take It with You.

Other Resources About Fran Kranz

What Schools Are Affiliated With Fran Kranz?

Fran Kranz is affiliated with the following schools: