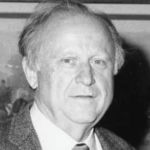 Why Is Frank Herbert Influential?

According to Wikipedia, Franklin Patrick Herbert Jr. was an American science fiction author best known for the 1965 novel Dune and its five sequels. Though he became famous for his novels, he also wrote short stories and worked as a newspaper journalist, photographer, book reviewer, ecological consultant, and lecturer.

Other Resources About Frank Herbert

What Schools Are Affiliated With Frank Herbert?

Frank Herbert is affiliated with the following schools:

What Are Frank Herbert's Academic Contributions?

Frank Herbert has made the following academic contributions: