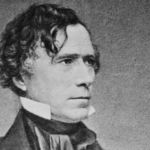 Why Is Franklin Pierce Influential?

According to Wikipedia, Franklin Pierce was the 14th president of the United States serving from 1853 to 1857. He was a northern Democrat who believed that the abolitionist movement was a fundamental threat to the unity of the nation. He alienated anti-slavery groups by signing the Kansas–Nebraska Act and enforcing the Fugitive Slave Act, and conflict between North and South persisted until southern states seceded and the American Civil War began in 1861.

Other Resources About Franklin Pierce

What Schools Are Affiliated With Franklin Pierce?

Franklin Pierce is affiliated with the following schools: