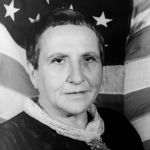 Why Is Gertrude Stein Influential?

According to Wikipedia, Gertrude Stein was an American novelist, poet, playwright, and art collector. Born in Pittsburgh, Pennsylvania, in the Allegheny West neighborhood and raised in Oakland, California, Stein moved to Paris in 1903, and made France her home for the remainder of her life. She hosted a Paris salon, where the leading figures of modernism in literature and art, such as Pablo Picasso, Ernest Hemingway, F. Scott Fitzgerald, Sinclair Lewis, Ezra Pound, Sherwood Anderson and Henri Matisse, would meet.

Other Resources About Gertrude Stein

What Schools Are Affiliated With Gertrude Stein?

Gertrude Stein is affiliated with the following schools:

What Are Gertrude Stein's Academic Contributions?

Gertrude Stein has made the following academic contributions: