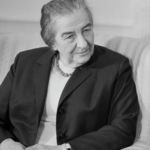 Why Is Golda Meir Influential?

According to Wikipedia, Golda Meir was an Israeli politician, teacher, and kibbutznikit who served as the fourth prime minister of Israel from 1969 to 1974. She was the first woman to become head of government in Israel. Born in Kyiv in Ukraine, she immigrated to Wisconsin, United States as a child with her family in 1906, and was educated there, becoming a teacher. After getting married, she and her husband emigrated to then Palestine in 1921, settling on a kibbutz. Meir was elected prime minister of Israel on March 17, 1969, after serving as labour minister and foreign minister. The world's fourth and Israel's only woman to hold the office of prime minister, and the first in any country in the Middle East, she has been described as the "Iron Lady" of Israeli politics.

Other Resources About Golda Meir

What Schools Are Affiliated With Golda Meir?

Golda Meir is affiliated with the following schools:

What Are Golda Meir's Academic Contributions?

Golda Meir has made the following academic contributions: