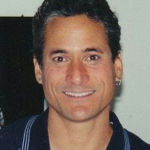 Why Is Greg Louganis Influential?

According to Wikipedia, Gregory Efthimios Louganis is an American Olympic diver, LGBT activist, and author who won gold medals at the 1984 and 1988 Summer Olympics, on both the springboard and platform. He is the only man and the second diver in Olympic history to sweep the diving events in consecutive Olympic Games. He has been called both "the greatest American diver" and "probably the greatest diver in history".

Other Resources About Greg Louganis

What Schools Are Affiliated With Greg Louganis?

Greg Louganis is affiliated with the following schools: