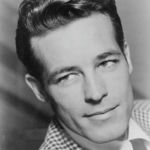 Why Is Guy Madison Influential?

According to Wikipedia, Guy Madison was an American film, television, and radio actor. He is best known for playing Wild Bill Hickok in the Western television series The Adventures of Wild Bill Hickok from 1951 to 1958. During his career, Madison was given a special Golden Globe Award in 1954 and two stars on the Hollywood Walk of Fame in 1960.

Other Resources About Guy Madison

What Schools Are Affiliated With Guy Madison?

Guy Madison is affiliated with the following schools: