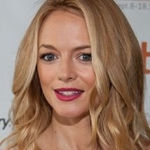 Why Is Heather Graham Influential?

According to Wikipedia, Heather Joan Graham is an American actress. After appearing in television commercials, her first starring role in a feature film came with the teen comedy License to Drive , followed by the critically acclaimed film Drugstore Cowboy . She then played supporting roles on the television series Twin Peaks , and in films such as Six Degrees of Separation and Swingers . She gained critical praise for her role as "Rollergirl" in the film Boogie Nights . This led to major roles in the comedy films Bowfinger and Austin Powers: The Spy Who Shagged Me .

Other Resources About Heather Graham

What Schools Are Affiliated With Heather Graham?

Heather Graham is affiliated with the following schools: