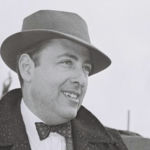 Why Is Herman Wouk Influential?

According to Wikipedia, Herman Wouk was an American author best known for historical fiction such as The Caine Mutiny for which he won the Pulitzer Prize in fiction. His other major works include The Winds of War and War and Remembrance, historical novels about World War II, and non-fiction such as This Is My God, an explanation of Judaism from a Modern Orthodox perspective, written for Jewish and non-Jewish audiences. His books have been translated into 27 languages.

Other Resources About Herman Wouk

What Schools Are Affiliated With Herman Wouk?

Herman Wouk is affiliated with the following schools:

What Are Herman Wouk's Academic Contributions?

Herman Wouk has made the following academic contributions: