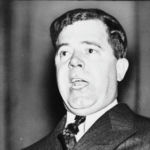 Why Is Huey Long Influential?

According to Wikipedia, Huey Pierce Long Jr. , nicknamed "the Kingfish", was an American politician who served as the 40th governor of Louisiana from 1928 to 1932 and as a United States Senator from 1932 until his assassination in 1935. He was a populist member of the Democratic Party and rose to national prominence during the Great Depression for his vocal criticism of President Franklin D. Roosevelt and his New Deal, which Long deemed insufficiently radical. As the political leader of Louisiana, he commanded wide networks of supporters and often took forceful action. A controversial figure, Long is celebrated as a populist champion of the poor or, conversely, denounced as a demagogue.

Other Resources About Huey Long

What Schools Are Affiliated With Huey Long?

Huey Long is affiliated with the following schools: