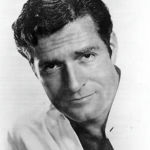 Why Is Hugh O'Brian Influential?

According to Wikipedia, Hugh O'Brian was an American actor and humanitarian, best known for his starring roles in the ABC Western television series The Life and Legend of Wyatt Earp and the NBC action television series Search . His notable films included the adaptation of Agatha Christie's Ten Little Indians ; he also had a notable supporting role in John Wayne's last film, The Shootist .

Other Resources About Hugh O'Brian

What Schools Are Affiliated With Hugh O'Brian?

Hugh O'Brian is affiliated with the following schools: