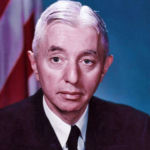 Why Is Hyman G. Rickover Influential?

According to Wikipedia, Hyman G. Rickover was an admiral in the U.S. Navy. He directed the original development of naval nuclear propulsion and controlled its operations for three decades as director of the U.S. Naval Reactors office. In addition, he oversaw the development of the Shippingport Atomic Power Station, the world's first commercial pressurized water reactor used for generating electricity. Rickover is also one of four people who have been awarded two Congressional Gold Medals.

Other Resources About Hyman G. Rickover

What Schools Are Affiliated With Hyman G. Rickover?

Hyman G. Rickover is affiliated with the following schools: