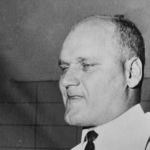 Why Is James Counsilman Influential?

According to Wikipedia, James Edward "Doc" Counsilman was an Olympic and hall-of-fame swimming coach from the United States. He was the head swimming coach at Indiana University from 1957 to 1990. He served as head coach for the USA's Olympic swim teams for 1964 and 1976; and was inducted as an Honors Coach into the International Swimming Hall of Fame in 1976.

Other Resources About James Counsilman

What Schools Are Affiliated With James Counsilman?

James Counsilman is affiliated with the following schools: