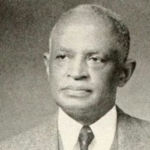 Why Is James E. Shepard Influential?

According to Wikipedia, James Edward Shepard was an American pharmacist, civil servant and educator, the founder of what became the North Carolina Central University in Durham, North Carolina. He first established it as a private school for religious training in 1910 but adapted it as a school for teachers. He had a network of private supporters, including northern white philanthropists such as Olivia Slocum Sage of New York.

Other Resources About James E. Shepard

What Schools Are Affiliated With James E. Shepard?

James E. Shepard is affiliated with the following schools: