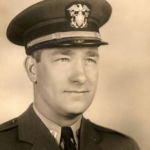 Why Is James Moran Sr. Influential?

According to Wikipedia, James Patrick Moran was an American football player and coach. A standout guard in high school and college, he played professionally for a total of 17 games with the Boston Redskins of the National Football League in 1935 and 1936. While stationed there with the Navy during World War II, Moran was head football coach at the University of South Carolina for the 1943 season. Later, he was head coach at Niagara University from 1946 to 1948, compiling a career college football coaching record of 15–17–2.

Other Resources About James Moran Sr.