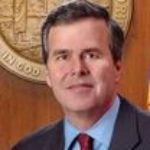 Why Is Jeb Bush Influential?

According to Wikipedia, John Ellis "Jeb" Bush is an American politician and businessman who served as the 43rd governor of Florida from 1999 to 2007. Bush, who grew up in Houston, was the second son of former President George H. W. Bush and former First Lady Barbara Bush, and a younger brother of former President George W. Bush. He graduated from Phillips Academy in Andover, Massachusetts, and attended the University of Texas at Austin, where he earned a degree in Latin American affairs. In 1980, he moved to Florida and pursued a career in real estate development. In 1986, Bush became Florida's Secretary of Commerce. He served until 1988. At that time, he joined his father's successful campaign for the Presidency.

Other Resources About Jeb Bush

What Schools Are Affiliated With Jeb Bush?

Jeb Bush is affiliated with the following schools: