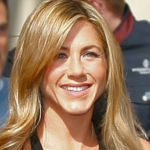 Why Is Jennifer Aniston Influential?

According to Wikipedia, Jennifer Joanna Aniston is an American actress and producer. She is the recipient of various accolades, including a Primetime Emmy Award, a Golden Globe Award and two Screen Actors Guild Awards, in addition to a nomination for a Critics’ Choice Award. Since her career progressed in the 1990s, she has become one of the world's highest-paid actresses.

Other Resources About Jennifer Aniston

What Schools Are Affiliated With Jennifer Aniston?

Jennifer Aniston is affiliated with the following schools: