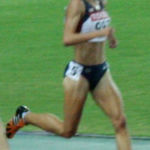 Why Is Jennifer Rhines Influential?

According to Wikipedia, Jennifer "Jen" Rhines is an American long-distance runner who competes in track, cross country and road running events. She has competed in three different Summer Olympics and made 15 US Teams. Rhines attended Villanova University as an undergraduate. While at Villanova, Rhines was a five-time NCAA individual champion: 5000 meters , 5000i meters , and cross country . She won the Honda Sports Award as the nation's top female cross country runner in 1994–95.

Other Resources About Jennifer Rhines

What Schools Are Affiliated With Jennifer Rhines?

Jennifer Rhines is affiliated with the following schools: