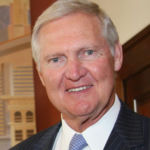 Why Is Jerry West Influential?

According to Wikipedia, Jerome Alan West is an American basketball executive and former player. He played professionally for the Los Angeles Lakers of the National Basketball Association . His nicknames included "Mr. Clutch", for his ability to make a big play in a clutch situation, such as his famous buzzer-beating 60-foot shot that tied Game 3 of the 1970 NBA Finals against the New York Knicks; "the Logo", in reference to his silhouette being incorporated into the NBA logo; "Mr. Outside", in reference to his perimeter play with the Los Angeles Lakers; and "Zeke from Cabin Creek", for the creek near his birthplace of Chelyan, West Virginia. West played the small forward position early in his career, and he was a standout at East Bank High School and at West Virginia University, where he led the Mountaineers to the 1959 NCAA championship game. He earned the NCAA Final Four Most Outstanding Player honor despite the loss. He then embarked on a 14-year career with the Los Angeles Lakers, and was the co-captain of the 1960 U.S. Olympic gold medal team, a squad that was inducted as a unit into the Naismith Memorial Basketball Hall of Fame in 2010.

Other Resources About Jerry West

What Schools Are Affiliated With Jerry West?

Jerry West is affiliated with the following schools: