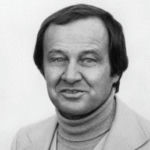 Why Is Jim McKay Influential?

According to Wikipedia, James Kenneth McManus , better known professionally as Jim McKay, was an American television sports journalist. McKay was best known for hosting ABC's Wide World of Sports . His introduction for that program has passed into American pop culture, in which viewers were reminded of the show's mission and what lay ahead . He is also known for television coverage of 12 Olympic Games, and is universally respected for his memorable reporting on the Munich massacre at the 1972 Summer Olympics.

Other Resources About Jim McKay

What Schools Are Affiliated With Jim McKay?

Jim McKay is affiliated with the following schools: