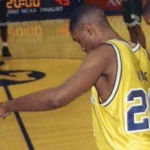 Why Is Jimmy King Influential?

According to Wikipedia, Jimmy Hal King is an American former professional basketball player. King played in the NBA and other leagues. He is most famous for his time spent on the famed University of Michigan Wolverines Fab Five along with Ray Jackson, Juwan Howard, Chris Webber, and Jalen Rose, who reached the 1992 and 1993 NCAA Men's Division I Basketball Championship games as freshmen and sophomores. He played all four years at Michigan and averaged 15 points per game as a senior in 1995.

Other Resources About Jimmy King

What Schools Are Affiliated With Jimmy King?

Jimmy King is affiliated with the following schools: