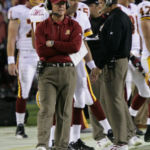 Why Is Joe Gibbs Influential?

According to Wikipedia, Joe Jackson Gibbs is an American auto racing team owner and former professional football coach. In football, he was head coach for the Washington Redskins of the National Football League from 1981 to 1992, and again from 2004 to 2007. During his first stint with the Redskins, he led them to eight playoff appearances, four NFC Championship titles, and three Super Bowl titles over 12 seasons. Gibbs is the only head coach to have won Super Bowls with three different starting quarterbacks. Gibbs is widely regarded as one of the greatest coaches in NFL history.

Other Resources About Joe Gibbs

What Schools Are Affiliated With Joe Gibbs?

Joe Gibbs is affiliated with the following schools: