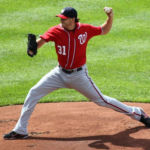 Why Is John Lannan Influential?

According to Wikipedia, John Edward Lannan is an American former professional baseball pitcher. He made his Major League Baseball debut with the Washington Nationals in 2007 against the Philadelphia Phillies; he was ejected from his first MLB game. He pitched with the Nationals for six seasons through 2012 and was the opening day starter in 2009 and 2010. He was relegated out of the rotation in 2012, and was eventually non-tendered making him a free agent. In December 2012, he signed with the division rival Phillies, with whom he was the fifth starter during the 2013 season. He played with the New York Mets in 2014.

Other Resources About John Lannan