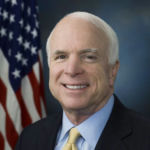 Why Is John McCain Influential?

According to Wikipedia, John Sidney McCain III was an American politician, statesman, and United States Navy officer who served as a United States Senator for Arizona from 1987 until his death in 2018. He previously served two terms in the United States House of Representatives and was the Republican nominee for president of the United States in the 2008 election, which he lost to Barack Obama.

Other Resources About John McCain

What Schools Are Affiliated With John McCain?

John McCain is affiliated with the following schools:

What Are John McCain's Academic Contributions?

John McCain has made the following academic contributions: