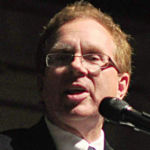 Why Is John Nichols Influential?

According to Wikipedia, John Harrison Nichols is a liberal / progressive American journalist and author. He is the National Affairs correspondent for The Nation and associate editor of The Capital Times. Books authored or co-authored by Nichols include The Genius of Impeachment and The Death and Life of American Journalism.

Other Resources About John Nichols

What Schools Are Affiliated With John Nichols ?

John Nichols is affiliated with the following schools:

John Nichols has made the following academic contributions: